What a great 101st conference!  We had 110 in attendance, the papers were outstanding and our Bandelier speaker, Kate Spielmann gave a wonderful keynote address.  It was an honor to host the conference ... Thanks to everyone who attended and participated!  ...... TCAS

Our caravan left Moriarty at about 8:45 am and arrived at the jump off point on the Chilton Ranch approximately one hour later.  The day was perfect: warm, almost clear, with gentle breezes.

We first area investigated the rock art on the west side of the county road.  Within several yards of the roadside, the first of many isolated rocks bearing petroglyphs was discovered.  Soon several others were found and then like kids in a candy store, people were excitedly calling back and forth,a “Ooo, look at this”, “Come over here -- see this great….”  And so it went all the way up the steep, rock strewn slope to the vertical sandstone wall.  More carefully then the party searched every cranny and crevice, seeking out rock art treasures left there by Native Americans many years before.  Dominating the scene were two large (six feet tall (?) Awanyus as the Tewa refer to the feathered or horned serpents which are said to represent the water spirit or god.

One by one, as the folks began to run out of film or energy, we made our separate ways off the ridge regrouping at the parked vehicles.  Everyone grabbed more film and their lunches and headed east and south across the alkalai sacaton grass bottom to the base of the next ridge.  Beckoning to the rock art hunters were scattered glyphs on most of the larger rocks -- luring us onward to greater treasures yet to be discovered.  Within less than one half mile up canyon and about two thirds of the way up the ridge slope, a short vertical sandstone wall was encountered.  Two large sandstone blocks joined at right angles to form a corner with two head high panels on which a multitude of petroglyphs were prominently displayed-- such a wide variety, some similar to those previously seen on the large wall across the canyon, others unique.  We were suffering from visual overload as well as energy depletion, so we sat down on the floor of this magnificent outdoor art gallery, ate lunch and pondered the meaning and wonder of the works before us. 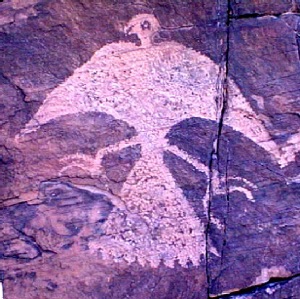 Sunday was a great day to visit the salt lake in the center of the Estancia Valley.  We made a stop at the overlook on US 60 to read the historical marker and to marvel at the remnants of Lake Estancia, which was once the largest fresh water lake in the Southwest where Folsom man, Sandia man and Clovis man lived and hunted along it’s shores.

Over the years, the rains slowed and evaporation took its toll.  The lake became restricted and salty until it became as we see it today.

We drove north off of Hwy 60 several miles to the Spanish La Salina Land Grant which includes the only lakebed in the valley that contains significant quantities of pure salt.  This salt was first used by the early Indian tribes to tan hides and preserve meat.  The Spanish used the salt during the 16th and 17th  centuries in the smelting of silver ore, and early settlers in the 1800’s and 1900’s used the salt in ranching and farming.

We inspected the remains of the last mining operation (in the 40’s) which pumped saltwater brine from hand dug, timber lined vats out in the lakebed to shallow ponds onshore where the brine evaporated into layers of salt.

We ate our lunch overlooking the lake bed and discussed the historical significance of Lake Estancia and this famous salt source.

Wow!  Talk about petroglyphs – we saw some outstanding examples including a near life-sized shield bearer. This field trip was led by Helen and Jay Crotty.  Comanche Gap is just down the road north of Moriarty on NM highway 41 on the west side of the road.  We had to cross private land to access the State Trust Land portion where we saw many wonderful examples of birds, mythological beings, mammals and lots of geometrical designs.  I may be going out on a limb, but this field trip was by far the most physical of the four – I think.  We started out slowly on the back side, but by the time we were on the south face we were scrambling up and down rock rubble trying not to miss a thing.  It was a beautiful day and everyone enjoyed the trip.  Thanks, Helen and Jay!

Our field trip toured Pueblo Blanco, Pueblo Colorado, and Pueblo de la Mesa. Pueblo Blanco (Tabira) contains a large masonry pueblo and the remains of a Spanish mission (A.D. 1200  - 1670‘s).  Pueblo Colorado is a large masonry pueblo containing up to 1000 rooms in 21 room blocks (1200 A.D. - late 1600’s).  Pueblo de la Mesa is an early glaze (Glazes A and B, 1300s-early 1400s) pueblo that sits on the butte southeast of Pueblo Colorado. Alison Rautman from Michigan State tested the site in the early 1990s. The visit to the site entailed a short but challenging climb up the butte, but we were rewarded with wonderful views of the surrounding country.